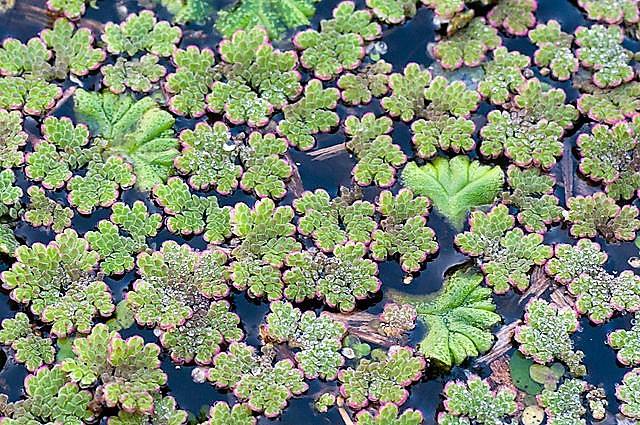 Azolla filiculides is the tiny green embodiment of the old saying that one person’s trash is another person’s treasure. Some view Azolla, also known as water fern or red water fern, as an invasive pest and want to eradicate every last molecule of it — understandable, as its enthusiastic growth makes it able to cover the entire surface of a lake with a thick, sun-blocking mat in less than a year.

This fern with leaves the size of a gnat is much more than a nuisance — though it can be that, clogging pipes and filters and smothering water basins. It is an excellent livestock feed — chickens, ducks and pigs are especially fond. It is also a rich source of fertilizer — a watery cover crop that becomes a powerful “green manure” when harvested and applied to fields as a mulch and soil amendment.

But Azolla filiculides’ true superpower is its ability to fix nitrogen, a bit of wizardry the fern works in a symbiotic dance with the cyanobacteria (Anabaena) that live in the plant’s leaves, which enable the fern to make use of the nitrogen in the air. Azolla and Anabaena have been at this “perfect marriage” for some time, according to the Azolla Foundation. Fossil records locate water fern in the late Cretaceous Period right along with dinosaurs, 70 million years ago. Anabaena was right there with it — the only known symbiosis in which a cyanobacterium passes directly to subsequent generations by way of the plant’s reproductive spores. During their 70 million years together, Azolla and Anabaena have co-evolved numerous complementary ways that make them increasingly efficient.

The latest excitement over Azolla is its potential to help mitigate the effects of climate change, according to a report from Inverse. Most plants can’t fix their own nitrogen and rely on a complex relationship with soil to create that alchemy. Water fern’s capacity for fixing its own nitrogen allows Azolla the sustained, rapid growth that makes it the bane of pond-owners and the grail for researchers looking for a likely source of biofuel. Because fossil resources are finite and their large-scale use as fuel continues to negatively impact the global climate, the hunt is on for plant alternatives to meet our requirements for fuel and chemicals.

Though some plants have been used successfully to create biodiesel, many plant-based alternatives are unsustainable. Biodiesel feedstocks such as soybean, canola, palm and sunflower oil are inefficient and require significant inputs, in addition to competing with food production for water resources and arable land. What is needed are plant crops that are low-input, land-efficient and highly productive. Enter Azolla filiculides, which can be cultivated in closed systems or fresh-water lakes and ponds. Water fern is one of the fastest-growing plants on the planet and can be cultivated in massive quantities using precisely no soil.

According to the journal BioEnergy, the plant’s rapid growth makes it an exceptionally attractive source of biomass to convert into fuel; its lipid profile supports this potential use. Based on its fatty acid profile, the journal reports, Azolla biodiesel meets the European Committee for Standardization’s criteria for use as fuel.  Though palm oil and microalgae outperform water fern in production of oil, Azolla’s sheer ability to reproduce itself makes it the big winner for a dependable amount of biomass for direct use as a diesel fuel, according to the report in BioEnergy. The amount of biodiesel that can be produced from the Azolla lipid fraction is nearly three times higher than that of soy, for example.

According to the Azolla Foundation, the fern is able to produce biofertilizer, livestock feed, food and biofuel exactly where they are needed and, at the same time, draw down large amounts of CO2 from the atmosphere, helping to reduce the threat of climate change. It wouldn’t be the first time the fern has contributed significantly to reducing carbon dioxide on the planet. According to Cornell University assistant professor Fay-Wei Li, PhD, who co-authored a recent study on Azolla filiculides, a bloom of the fern 50 million years ago in the Arctic was so massive that geologists believe it drove down a significant amount of carbon dioxide and helped cool the Earth.

Azolla has the potential to be a significant carbon sink today as rising carbon dioxide levels are directly linked to the warming of the planet and subsequent changes in Earth’s climate. Millions of years ago, this tiny, aggressive fern sequestered so much carbon it helped cool the globe out of “hothouse” conditions. Some scientists say it could do the same for us today.

In a study published in early July in Nature Plants, an international team of scientists reported that they had successfully sequenced the A. filiculides genome as well as that of Salvina cucullate, another floating fern. University of California Berkeley integrative biology professor Carl Rothfels, one of the study’s authors along with Li, said that sequencing these genomes brings scientists closer to understanding these species “crazy biology.”